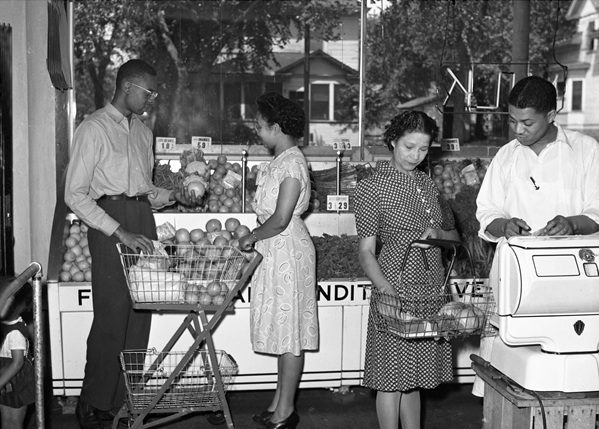 Its location at 678 Rondo Avenue was constructed between 1910 and 1925, when the neighborhood was still largely inhabited by Jewish residents. Prior to the Credjafawn Co-op beginning operation in 1946, the building had been run as a neighborhood grocery store by a succession of Jewish owners, including Jack Dimond, who supported Credjafawn by buying ads in their concert programs.

Unfortunately, Credjafawn Co-op did not survive long; by the mid-1950s, it had become Martin’s Grocery. Soon thereafter, it and its neighboring businesses were demolished as a result of  Interstate-94 being federally constructed through the heart of the Rondo neighborhood. What remains of the neighborhood’s historical commercial business district on Rondo Avenue (now Concordia Avenue) borders the southern edge of I-94, its businesses long since gone.

Photos of the Credjafawn Co-op can be seen on display in the seating area of our Selby store, commemorating its immense impact on our surrounding community. Mississippi Market proudly serves as Credjafawn Co-op’s successor and is honored to carry on its legacy as a community-owned and -operated grocery store where everyone is welcome, and anyone can shop.

Special thanks to Lisa Tabor, Founder and President of CultureBrokers LLC, for introducing us to Credjafawn Co-op. CultureBrokers LLC is a certified minority, woman-owned business enterprise focused on developing intercultural inclusion initiatives and building community relationships. Mississippi Market has partnered with them in the past on development of an intercultural inclusiveness initiative at the co-op.