In my family, we eat soul food on holidays. (And sometimes just because.) My grandma’s tender and savory stewed greens, candied yams, cornbread dressing, sweet potato pie, and her nothing-else-compares mac and cheese, to name a few. Our New Year’s Day meal includes black-eyed peas, collard greens and cornbread to symbolize good fortune for the coming year. Thanks to my mom’s side of the family, I’ve eaten soul food my whole life. It’s near and dear to my heart, and nothing compares to how my grandma makes it.

WHAT IS SOUL FOOD?

The dictionary describes soul food as “food (such as chitterlings, ham hocks, and collard greens) traditionally eaten by southern Black Americans.”¹ But this definition barely scratches the surface. It leaves out how, through the unfathomable horrors of the Middle Passage and bondage in North America, generations of enslaved people created and preserved culinary traditions that remain strong today. It leaves out the grit, resiliency and ingenuity it took to create these dishes; the beauty and love that persevered through centuries of African American heritage.

“Soul food is a coined term that brilliantly captures the humanity and heroic effort of African Americans to overcome centuries of oppression and create a cuisine that deliciously melds the foods and cooking techniques of West Africa, Western Europe, and the Americas.”²

According to soul-food scholar Adrian Miller, soul food is the food of the Deep South that was transported across the United States during the Great Migration.³ The term “soul food” has been used since the 1940s to describe the recipes Black Americans have been cooking for generations, but the term didn’t become commonplace until the ‘60s with the rise of the Civil Rights and Black Nationalist movements.

Miller says “Generally, on a designated day of the week, each slave was allotted five pounds of a starch (cornmeal, rice or sweet potatoes); a couple of pounds of dried, salted, or smoked meat (whatever was cheapest); and a jug of molasses. That’s it. The enslaved had to figure out ways to supplement their diet by fishing, foraging, hunting, gardening (some transplanted vegetables from Africa like okra), and raising livestock with farming knowledge passed down from West Africa, and new knowledge shared by their European slavers, neighboring poor whites, and Indigenous people of the area.”²

With these rations, enslaved people preserved African food traditions and adapted traditional recipes with what was available. Some of the key ingredients of soul food, such as rice, okra, greens and sweet potatoes, show a clear “historical link to America’s dark slavery past and the African cultures that the enslaved carried with them,”5 according to Black Foodie writer Vanessa Hayford.

In their search for profitable crops, slave traders intentionally took several crops that were native to Africa. They made limited portions of these foods available on the slave ships to keep the enslaved alive, and once in the states, the enslaved Africans grew these crops on the plantations. 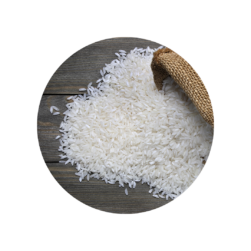 The African variety of rice (later known as “Carolina Gold”) set the foundation for some of the most notable southern culinary traditions. West Africans were purposefully kidnapped from rice-growing regions to grow rice in the south; this grain didn’t exist in the region before the arrival of slaves.6, 7

Since rice is a staple in many African dishes, enslaved Africans adapted their cooking in the states with what was available here, creating some of the most renowned soul food dishes. For example, there are clear similarities between jambalaya and jollof, a traditional dish in many West African countries, while Hoppin’ John is similar to Ghana’s waakye and Senegal’s thieboudienne.³ 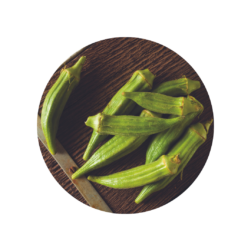 The word okra comes from the Igbo word for the vegetable, okuru. Historian Christina Regelski writes, “Native to Ethiopia, okra is one of the many food staples that traversed the Atlantic Ocean from Africa to the Americas and is one of the most prominent foods associated with the influence of African culture on the New World.”4 In West Africa, okra was used to thicken soups and one-pot meals, and many of the enslaved grew okra in their gardens. It continues to be a staple in gumbo today, which is derived from ki ngombo, the Bantu word for okra.5 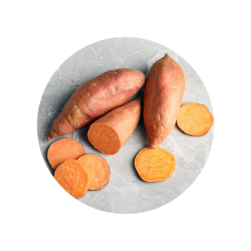 Native to the Americas, sweet potatoes were strikingly similar to West African yams, and enslaved people applied the traditions and techniques they used for yams to the sweet potatoes. These hearty vegetables could be grown in lower quality soil, which made them an ideal crop for enslaved people to grow in their gardens.4 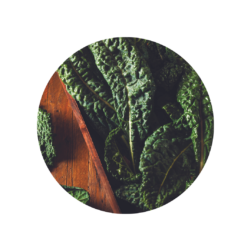 Hayford explains that “the cheapest, least desired cuts of pork – such as the head, ribs, feet, or internal organs – were reserved for the slaves’ weekly food rations.”5 These animal parts, such as ham hocks, were often used to flavor greens and vegetables instead of eaten outright.4

Enslaved West Africans often prepared a dish similar to modern soul food greens, and the juices from cooking, called “potlikker,” were soaked up and eaten with cornbread. “This style of eating is reminiscent of various traditional dishes in Africa,” Hayford writes. “Whether it’s injera in Ethiopia or fufu in Nigeria, many African countries have a practice of dipping a staple starch into a vegetable and meat-based gravy.”5

Soul food’s history begins with the oppression of generations of people. It is a synthesis of cultures, limited access to food, and resilience. To me, it means strength, comfort and family. I encourage you to enjoy soul food for yourself:

By Lachelle Cunningham, one of our class instructors:

4  “The Soul of Food: Slavery’s Influence on Southern Cuisine.” ushistoryscene.com.

Soul Food: The Surprising Story of an American Cuisine, One Plate at a Time by Adrian E. Miller

High on the Hog: A Culinary Journey from Africa to America by Jessica B. Harris (Also a docuseries on Netflix!)

In the Shadow of Slavery: Africa’s Botanical Legacy in the Atlantic World by Judith Carney